The Mission of the Neuse Forest Presbyterian Church is to Glorify GOD and to actively seek to bring the Good News of Jesus Christ tot he lost, and to minister to those who have been found.

History of The Church

Neuse Forest Presbyterian Church can trace its roots back to 1916.  A Sunday School was started and became the Thurman School.  Then, the First World War interrupted that endeavor.

In the 1920’s second effort was made.  A small building was purchased and moved to the current church site.  This building was incorporated into the sanctuary portion of the current building.

On November 18, 1945 the Neuse Forest Presbyterian Church was organized with 76 charter members.  During its 74-year history, it has produced 13 ordained ministers, as well as numerous civic leaders, teachers, doctors, and other community leaders, while continuing to serve a primarily blue-collar congregation.  At its largest, average worship attendance was about 175.

Throughout its history it has been known as a giving church that stressed love of God as well as love of humanity.  Scout troops, baseball teams, Religious Community Services, clothes closets, community breakfasts, Easter Sunrise services, Vacation Bible School, Toys for Tots, Dress-A-Bear, Quilting groups, county-wide choirs, Snack Packs for hungry Brinson Memorial School children, and many more outreach programs have originated here at Neuse Forest. For much of the past 45 years, the community has also been treated to the lovely music of the carillon bells sounding from our steeple.

Currently, the membership is very small.  Recognizing the need for volunteer housing after the increasing number of natural disasters in the area, and in the long tradition of service, the members of this congregation, along with New Hope Presbytery (the regional governing body of the PCUSA), decided to dedicate the “Sunday School Building” to this new purpose, sure in the knowledge that all who stay within its walls, as well as all who are touched by the work done by the volunteers, will be blessed by God through the use of this building. 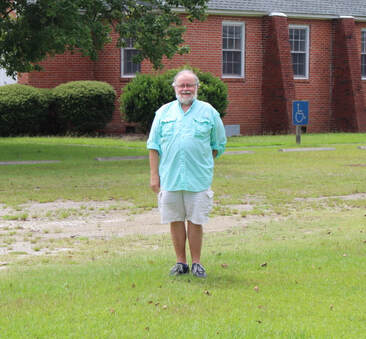 John is the past chair of the Craven County Disaster Recovery Alliance and represents New Hope Presbytery with North Carolina Voluntary Organizations Active in Disaster.

Born in Portland, Oregon, John is an adopted “Tar Heel”, having graduated from Reynolds High School in Winston Salem and earning his bachelor’s degree in history from UNC-Greensboro.  He is a graduate of Union Presbyterian Seminary in Richmond, Virginia.

John and his wife, Helen, moved to New Bern in 2015.  They have two sons.  John Andrew lives in Winchester, Virginia with his wife and three children.  John Arron lives in Asheville, NC. 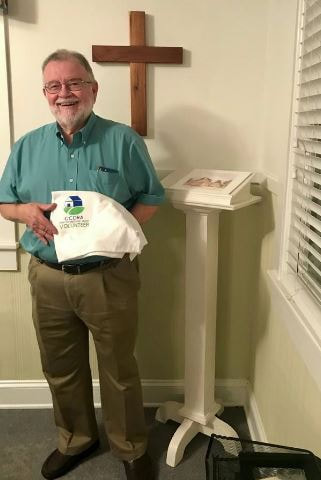 Rev. John A. Robinson, Jr.
John went on staff with PDA in 2002 and ran a team of 100 volunteers that he organized and deployed as an early response team after disasters.  In June 2005, he was named the Associate for US Disaster Response.  Just three months later, Hurricane Katrina tore through New Orleans.  John was there for weeks doing whatever he could to help and even implemented the Presbyterian Volunteer Village, which is still used today to provide housing, showers, laundry, meals and worksite coordination for volunteers willing to help clean up and rebuild communities following disasters.

“That’s my one claim to fame—I invented the PDA volunteer village,” he said proudly.

After owning a timeshare in Hilton Head for 40 years, John and his wife decided it was time to move south.  When he retired from PDA in 2015, that’s exactly what they did.

“My wife and I bought a house here in 2013 and moved down here in 2015.  We spent about 5 years deciding to move down here, and we love the place—never lived in a community that had more live stages than it did movie theaters,” he said with a smile.  “We have really enjoyed the people, the opportunities and the warmth and the spirit of this place.”

John is currently the pastor at Neuse Forest Presbyterian Church.  Upon moving to New Bern, he gradually worked his way from preaching once a month to becoming a permanent fixture last year.  As soon as Hurricane Florence hit, John did not hesitate to spring into action.  Through the collaborative efforts of many local churches and volunteers, John repurposed a defunct education building located behind the church as a volunteer village.
Referred to as “New Hope Village,” the 6,500-square-foot building houses up to 60 volunteers and allows them to continue recovery efforts in the area. Accommodations include showers, access to the church kitchen, internet access and equipment storage for work teams.  With John’s help, the building is in the process of being refurbished and outfitted with metal bunkbeds, hot water, a new roof, ADA-compliant showers and much more.  The church welcomes donations for the volunteer village, whether it is a financial contribution or simply helping with a meal and coming by to hear the teams’ stories of hope.

“Our objective is to have the very best volunteer hosting center here in Craven County,” said John. “We’ve had a really wonderful response from the community.”

John also helped form the Craven County Disaster Recovery Alliance (CCDRA) in December 2016 as a direct result of Hurricane Matthew.  CCDRA is a long-term disaster recovery cooperation made up of over 70 individuals and organizations, including United Way of Coastal Carolina, that work together to help rebuild communities after disasters.  The nonprofit resource center serves Carteret, Craven, Jones and Pamlico Counties and operates on a volunteer staff, allowing all funds to go directly to recovery efforts.

“I can’t say enough good about the United Way,” said John.  “I’ve just been blown away.  I hope Craven County realizes what an incredible asset they have.”

CCDRA is actively seeking volunteers to help with all aspects of the organization, including case management, volunteer committee members, donations management, housing issues and construction.  With the deadline for North Carolina residents to register for disaster assistance extended to December 13, anyone in need is urged to visit www.cravendra.org, click on “Contact Us” and fill out the short form.

“With 40 years of experience in disasters, some of that as a survivor, I can really tell people I know what it’s like,” he said.

Due to those decades of involvement, John is very familiar with the processes that go along with recovery.  He encourages people to take action now and utilize all resources that are available, regardless of the extent of damage.

“It’s really important for people to register for FEMA even if there’s no apparent damage,” John said.  He explained that mold and mildew can form farther down the road, and by then it would be too late to receive aid if they had not registered.  He also emphasized the importance of following up with FEMA if a claim is rejected, explaining that in many cases, just calling and asking why will uncover a simple misunderstanding.

John currently serves as vice president of North Carolina Voluntary Organizations Active in Disaster, a group that connects organizations and enables them to work together during disaster preparedness, response, relief and recovery.  John coordinates volunteer support segments, connects people with the resources they need and acts as a mentor.

He is also the proud father of “two spectacular young men” and grandfather of three.

Despite all his accomplishments and unwavering leadership, John remains humble and insists that anyone else in his position would do the same.  “It’s really the community that’s come together to make things work,” he said.

That may be true, but John’s decision to put his all into recovery efforts across the country and make sure everyone is taken care of—even complete strangers—shows his commitment to serve others.  John is a man with a plan, and best of all, he is willing to share that plan to benefit the entire community.
What Do People Say About Us

Reverend John Robinson has made a tremendous impact on our community in just the few years since he and his wife, Helen, “retired” here. Moving from Winchester, VA, Reverend Robinson soon became the State Supply Pastor of Neuse Forest Presbyterian Church on Old Cherry Point Road. He also organized the Craven County Disaster Recovery Alliance during the response to Hurricane Matthew. This agency acts as a communications voice for recovery information and coordinates long-term community recovery. Before his “retirement,” Reverend Robinson worked for the national Presbyterian Disaster Assistance, so he is very knowledgeable about recovery work. In addition, Reverend Robinson has led the Neuse Forest Church in establishing a Volunteer Center in their unused Education Building. The new Volunteer Center will house out-of-area and out-of-state volunteers who come to assist the New Bern community in its recovery from Hurricane Florence. Reverend John Robinson is a compassionate man of vision and action!